A Pastoral Letter on Immigration from the Catholic Bishops of Wisconsin: Traveling Together in Hope

The Catholic Church, both in Cuba and in the United States, has repeatedly called for an end to the 50-year-old embargo that has prevented the engagement between the Cuban and American peoples. “The U.S. bishops welcome President Obama’s directives permitting and broadening purposeful and people-to-people travel to Cuba and allowing all Americans to send financial support to the Cuban people,” said Bishop Howard J. Hubbard of Albany, New York, chairman of the USCCB Committee on International Justice and Peace.

“These needed new policies are modest but important steps towards advancing our hopes for a better relationship between our people and the people of Cuba, a relationship which holds great promise of fostering positive and real change in Cuba.”

WASHINGTON (January 20, 2011)—Christian Churches Together in the USA (CCT) issued a response to Martin Luther King Jr.’s “Letter from Birmingham Jail” on January 14. The Christian leaders, who gathered in Birmingham, Alabama, January 11-14, to examine the relationship between poverty and racism, noted that no one has ever issued a clergy response to King's famous letter.

King's letter was an answer to a message from a group of clergy in Birmingham in 1963. In their “Call for Unity,” the clergy appealed for restraint and "common sense," and a withdrawal of support for the civil rights demonstrations.

In their one-page letter, the church leaders remember with gratitude the sacrifices of the leaders of the civil rights movement, who demonstrated the power of Christian, nonviolent action. They also express repentance that “some of us have not progressed far enough beyond the initial message from the Birmingham clergy.”

Bishop Joe S. Vasquez of Austin, a member of the CCT steering committee, represented the Committee on Cultural Diversity of the United States Conference of Catholic Bishops (USCCB) at the meeting.

“During the struggles of the civil rights movement, Birmingham was one of the most segregated and violent cities in America. Today, the city of Birmingham is filled with monuments, places of worship, and home to the Civil Rights Institute,” Bishop Vasquez said. “I had the opportunity to visit these places; however, most significant to me were the stories and personal testimony given by those who suffered the injustices of racism and segregation. These individuals were filled with prophetic courage, even to the point of sacrificing their own personal safety to bring about equality and justice. Their non-violent efforts to confront racism are deeply rooted in Gospel values that all men and women, regardless of color, are created in the likeness and image of God and, therefore, worthy of respect and dignity.”

Full text of the letter can be found at: www.ChristianChurchesTogether.org

The catholic church in the Middle East: communion and witness 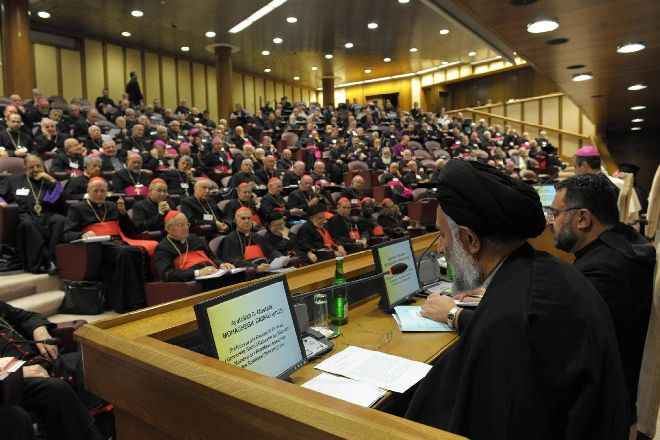 Some of the 41 propositions of the Special Assembly for the Middle East of the Synod of Bishops on the theme The Catholic Church in the Middle East: Communion and Witness."
Propositio 6 - The Land

Given that attachment to the land of one's birth is an essential element of the identity both of individuals and of peoples, as well as an environment of freedom, we exhort our faithful and our Church communities not to give in to the temptation to sell off their real estate. In difficult economic circumstances, we propose to help Christians ... retain possession of their lands or to acquire new ones through the creation of projects responsible for making them prosper, allowing the owners to stay where they are with dignity. This effort must be accompanied by an in-depth examination of the meaning of the Christian presence and vocation in the Middle East.

The U.S. Conference of Catholic Bishops will launch an extensive new website dedicated to the new book Benedict XVI: Essays and Reflections on His Papacy, which was published this fall by the USCCB in conjunction with Sheed & Ward, an imprint of Rowman & Littlefield Publishers. The site, www.popebenedictbook.com, goes live Wednesday, December 1.

The new website, designed by Mach 1 Media, offers a full-color tour of the new book, with a photo gallery, excerpts from the essays and a selection of the personal reflections featured in the book, and Q&As with several of the contributors. Video clips of Cardinal Sean O'Malley of Boston, Cardinal Francis George of Chicago, and Archbishop Timothy Dolan of New York add lively reflections from three of the book's contributors. Visitors to the site can click to purchase the book from a variety of retailers.

Urge protection for low-income families, children
Current unemployment numbers concern bishops
Need to continue Emergency Unemployment Compensation to protect jobless and families WASHINGTON (December 7, 2010) — Congress should protect vulnerable communities, particularly low-income families and children, and support the continuation of the Earned Income Tax Credit, the Child Tax Credit and Emergency Unemployment Compensation, said the U.S. bishops in a December 6 letter to both houses of Congress. The priorities of the letter were reflected in a tentative deal struck by Congress and the Obama administration later that day.

“Presently, the Refundable Child Tax Credit and expanded Earned Income Tax Credit encourage work and family life,” said Bishop Stephen Blaire of Stockton, California, chairman of the Committee on Domestic Justice and Human Development of the United States Conference of Catholic Bishops (USCCB). “To keep in place tax cuts for more affluent families while ending the tax help for those families in greatest need would be bad policy and unjust. For example, a low-income family with two children, with one income at the minimum wage ($15,000 a year), stands to lose roughly $1,400 if the 2009 Child Tax Credit reform is eliminated. In such an economic climate, a promise to raise taxes on no one must include low-income families.”

Bishop Blaire added that Congress had a moral obligation to help the unemployed, citing that jobless numbers in the U.S. have climbed to over 15 million, or to 9.8 percent.

WASHINGTON (December 7, 2010) — Representatives of the United States Conference of Catholic Bishops (USCCB) and the National Association of Evangelicals (NAE) called for the ratification of the New START Treaty in a December 7 media conference call.

Both Bishop Howard J. Hubbard of Albany, chairman of the USCCB Committee on International Justice and Peace, and Leith Anderson, president of NAE, applied the moral teachings of their faith traditions to concerns related to the treaty, which was signed by President Obama and Russian President Dmitry Medvedev on April 8.

“Nuclear war is rejected in Church teaching because nuclear weapons cannot insure noncombatant immunity and their awesome destructive power and lingering radiation cannot be meaningfully proportionate,” said Bishop Hubbard. He cited the teachings of the Second Vatican Council and Pope Benedict XVI’s 2006 World Day of Peace message, in which the pope said, “In a nuclear war there would be no victors, only victims.”

Anderson said, “In the long and tragic history of human warfare the nuclear weapon occupies a singular position due to the scope and scale of its terrible and indiscriminate power to destroy human life. Evangelicals strongly believe in the sanctity of life.”